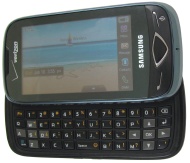 The Samsung Reality features a 3-inch touch screen and a comfortable, slide-out QWERTY keyboard, but there are better options on Verizon.

At first glance, the Samsung Reality seems like a successor to the wildly popular Samsung Rogue from last year; both have touch-screen displays, slide-out QWERTY keyboards, and are from Verizon Wireless . But if you look a little closer, the Reality is...

The Samsung Reality has an intuitive display, three home screens, a 3.5mm headset jack, a nice keyboard, and features that include a 3.2-megapixel camera, GPS, and stereo Bluetooth.

The Samsung Reality isn't quite as good as the Samsung Rogue, has almost the same design and features, and is also on Verizon Wireless. We also wished the photo quality was better.

On its own, the Samsung Reality is a great midrange multimedia phone, but it doesn't hold a candle to the Rogue, which has a better design and better features.

If you listen to music alot on your phone, DO NOT BUY THIS PHONE!! It freezes and won't start back up unless you take the battery out or turn the phone off. It will not turn sideways when you slide the keypad out, and wont turn off, and you will have...

Great starting phone, Its really easy to text on. The lock feature, It comes in handy. Calling and Texing is really simple. Keypad slides out easily.

Music player freezes often When you recive a Multimedia message it takes a while to save the picture/video to phone or card.

Decent phone, not great, not terrible

I had this phone for 1.5 years until I accidentally broke it in two halves. Overall a solid feature phone that seemed like it was rushed together. The 3 homescreens are a pretty neat touch for a non-smartphone, and I didn't have any problems with the...

A feature phone with a touch screen. Just Awesome.

1) okay i haven't had any problems as in freezing; but it is much better then that piece of junk that the Samsung Rogue is; i tried to activate the phone and it froze; rebooted the phone and it was still frozen. 2) feels kinda cheap; material wise;

Typical battery for a cell phone

Do NOT purchase this phone

We bought two of these for family members and within weeks both shut off randomly and had to be returned. Would not recommend this phone to anyone.