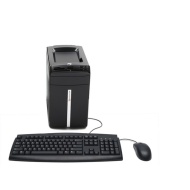 It came as advertised and runs very well. IT was very easy to set up after I booted twice as it was saying the system was not shut down well last time used. I've been able to load Office and Norton easily and its running very fine.

I think it would be great if we could have Office fully loaded on systems even if the price is up a bit. Having to buy it after purchase of the system is not the best. it would be cheaper for you to buy it bulk and spread the cost on the system than...

Price, Easy to set up, Windows7.

Good general purpose pc. Getting it running was straight forward. Fairly standard range of software supplied, enough to have you up and running. Very atractive compact tower does not take a lot of room. Card and usb ports very easy to access.

Very compact. Connections very easily identified as you would expect.

great little pc...well worth the money,,,,would definetly recommend to a friend

not really a bad point...when i set it up nothing on desktop opened up..phoned customer service..the fella was really helpful...seemed the windows 7 hadnt been installed correctley..once i restored back to factory settings its been great,,if that hadnt...

Easy to set up and connect to internet. Very compact size much smaller than my last one

Found the whole process of setting up a doddle, and the speed of connecting to internet is fantastic. Well done.

Had to uninstall eval versions of software we didn't need