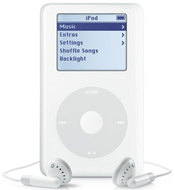 Apple didn't do much new when it introduced the fourth generation of the iPod, but it didn't need to. No one has beaten the company at the portable-audio-player game yet, but with 75 percent market share, the only way to go is down. The...

Still the player to beat despite a premium price and minimal features. The fourth generation of the Apple iPod doesn't sound any better than the third, but it doesn't need toas long as you don't use the EQ settings.

The iPod themselves used to come in two separate incarnations. The one's solely for your music, and one sporting a colour screen so you can view your downloaded photographs on the move. Well now that's no more. Every single iPod released has this...

Apple iPod v4: Accessories There's a difference between the 20GB's and the 40GB's accessory set (storage capacities may have changed during time, Apple tends to play around with those for marketing-technical reasons). Very clever marketing by Apple has re

Well, Apple of course had already set the standards a long time ago, but their 4th generation of iPods will probably manage to extend the brand's lead over the competition even further. While there's hardly anything revolutionary to be found on this...

What you're demanding from your music player will determine whether this iPod update will satisfy you. If your digital music collection remains relatively small and you don't need half-a-day's worth of battery life, you're probably better off with an iPod