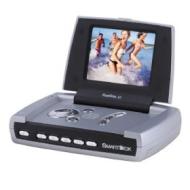 This interesting PMP has a tiny 3.6" screen and accepts CF cards with an "instacopy" button to transfer files...

FlashTrax XT sports enhanced audio-video capabilities, a revamped body, and other improvements for anyone who wants to capture and view multimedia files on a handheld device.

Larger, heavier body and not as elegant-looking as previous model ; can no longer rotate photos ; photos do not include detailed EXIF data ; inconvenient DOS naming convention ; clunky interface ; does not play Apple AAC music format

FlashTrax's most exciting new feature is its ability to record both audio and video and to let you listen to and record FM radio to its hard drive. The FlashTrax can play video encoded with MPEG-4 simple profile (SP) and Windows Media Version 9 SP;...

I picked this unit up a few weeks ago and couldn't be happier. It does what I want it to do. I have been looking to pick something like the Archos player for a while but couldn't justify to myself the prices they want. So one day I was just nosing ...

Price, capabilites are great. Video player with 40gb cheaper than the archos

Price, capabilites are great. Video player with 40gb cheaper than the archos.