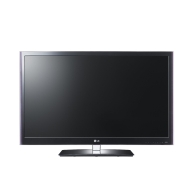 We’re not done with the LAN socket yet, as it happens, for it has a third use: as mandatory support for a built-in Freeview HD tuner. This tuner alone would be enough to justify the mere few quid the 42LV550T now costs over and above the 42LV450U, even...

The LG42LV550T is a fairly cheap and relatively cheerful 42in flatscreen

A somber-looking set matched by a rather average picture performance

It might not have 3D, but this 42-inch LG TV still has plenty going for it

Although LG's passive 3D system has comprehensively proven its worth, at least where relatively compact screen sizes are concerned, it still comes as a slight relief to find that the brand's 42LV550T doesn't have 3D built in. It means there's no need...

The smart menu is a bit slow and clunky.

Very had to connect to recorder and other units

Wish it came with the smart remote to make navigating the internet quicker.

Excellent quality tv. Easy to set up and use Great design and built quality Would highly recommend

Sound volume in very low. The quality of the sound is excellent however have to have the volume on 100% when watching certain films and tv shows. Was disappointed that you have to order the LG Dongle seperate, to use Smart TV function; which this store...

Sound quality could be better.