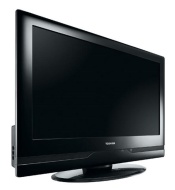 96% of the reviews on Amazon.co.uk give this product a positive rating.

Could this be the TV bargain of the Christmas season?

As if that wasn't enough, the TV's spec list also shows that it carries Faroudja's DCDi system. This deinterlaces the image and blends rough edges in diagonal lines, to reduce that jagged, noisy look that otherwise tends to afflict standard def pictures.

A stylish LCD with a budget pricetag, but can it perform?

Amazing price ; Performs above its station

Although far from perfect, if you're on a tight budget, the 32AV555 gives you far more quality for £350 than you've any right to expect

If you like your LCDs fancy, then this Toshiba may not be for you, but those seeking good value on a budget may have a winner

Cheap as chips ; solid picture for the money ; accepts1080p/24fps ; sound is above average

Not the insight or poise of best ; a little soft with standard-def ; average spec

Low on frills but high on value, it’s a good option if you’re on a tight budget

Not surprisingly, it doesn't exactly set the world on fire with its looks, which are resolutely bland. It's also rather average in the connections department, thanks to its carriage of just two HDMIs rather than the three sported by our other three...

So cheap it's silly, fair specification and good performance for the money

EASY TO SET UP

BIT SLOW TO REACT TO THE REMOTE

price, design and quality of picture

Slow to come on and when switching channels.

The response to instructions from the remote control is very slow.