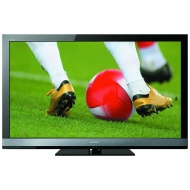 Freeview HD, LED backlighting, and internet widgets have gone from being pipe dreams to mainstream in no time at all, but few sets have combined all three to such seductive effect as the Sony KDL-40EX703.

The KDL-40EX703 is a well equipped TV, demonstrating a better than average level of performance although doubts remain over Edge lit LED performance ..

The KDL-40EX703 is a well equipped TV which demonstrates a better than average level of overall performance. We have some reservations though in that Sony's own KDL-40EX503 compares favourably in terms of performance and is significantly less expensive.

Sound average but this comment should be tempered by the fact that I have the TV on wall in kitchen where there is a high ceiling and hence some echoing!!

Lovely unit great picture (even though I am only on an old ariel). The way the television goes into sleep mode if no movement in the room is detected is very good.

You have to have a speaker system attached to the television as the speakers built into the television buzz and loose quality very quickly if the sound is not played through a Cinema/Sound system.

would have been nice for the wireless plug to be with tv not sold has a extra.

Sound A Little Harsh,Had To Buy A Sound Bar To Listen To Most Programs. By the way the sound bar was not Sony, They were way too expensive.

Internal speakers not great, volume has to be fairly high to hear conversations. Screen has a built in light sensor that adjust the brightness of the pictutre depending on room light, but in bright sunshine the colours are a little over powering and in...